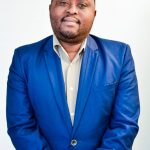 Thank you for giving me the chance to celebrate and honour Wandile Fana.

A tragic year in the history of South Africa when the youth had to take charge of the struggle for freedom and justice for the people of South Africa.  Perhaps a forecast of the kind of life that Wara would live. A life dedicated to the continuing battle for this freedom – a freedom that should be concentrated on our youth and the poor and marginalised.  And as a community activist first and a journalist second, for the freedom to tell truth to power and hold it to account.

Wara started his tertiary education at Unitra.  Proving that a sure way for a student to dropout is for a socialist to enrol for a B. Com.

He then went onto NMMU to study journalism/ media studies where he and Heather met and, as we all know well, fell deeply in love.  A warrior woman who has been his partner in all that he has done, the love of his life and the mother of his beloved children, Lali and Khaya.

Khaya and Lali also joined Wara and Heather in acting, for example, against gender based violence and discrimination – and for the freedom of Palestine.

Wara always had a sense of context and a sharp tongue and one of the last things he said to me from his bed in Livingstone was,  “YHO, this is a terrible, terrible disease, the headaches are so bad, so bad.  I wouldn’t wish this on my worst enemy. ……..But……I don’t think I have any enemies….. no, I don’t think I have any enemies………. Except perhaps Benjamin Netunyahu  ……. But no, I wouldn’t even wish it on him”

After completing their studies, at NMMU Wara and Heather returned to Cofimvaba. As you know Wara loved good food and was also a good cook.  He wanted to provide good and healthy food to the community so he began a takeaway business. In the mornings, he would walk around and take orders from businesses and offices, cook and then at lunchtime do the deliveries.

One day, Heather had to leave Lali, then 11 months old, with Wara. Lali strapped to his back and with plates of food in both hands, Wara delivered his orders. Can’t you just see it, baby on back, food balanced in both hands, laughing and challenging all the way.

Obviously they did not make much money so in 2007 Heather and Wara closed the takeaway and decided to use the skills they had gained at university. There was no newspaper in their area, so with the little bit of money they had, they co – founded Skawara Publishers and began producing Skawara News creating a voice for the community.   An A4, black and white, photostat product of 8 pages.   One could say the rest is history, but what a history…….

2006 and 2007 were years of unprecedented growth in the formation of black owned community newspapers. AIP was in existence but in dire need of transformation, particularly in the light of this growth. Other organisations purporting to represent and support community media were formed; all controversial and all struggling to find their space.  One of these was the Eastern Cape Communication Forum (ECCF) in East London.

In 2007 the ECCF organised a summit where many individuals and organisations in the community press sector came together for the first time: the MDDA, the AIP, Paarl Coldset as it was then called, owners of about 20 community newspapers in the Eastern Cape, government structures, universities and others.

Skawara News was struggling and Wara and Heather were wondering why they had embarked on this crazy idea. Then they attended this summit and discovered what they called their “tribe.”

Being Wara and Heather, they didn’t just want to provide the content of the newspaper but also wanted to own the means of production.

The opportunity to do this was provided by the ECCF in the form of the purchase of a Risograph. Still black and white, still A4 but faster and working to their own deadlines and rhythms and in isiXhosa, of which Wara was a passionate proponent. It also meant that they could service the community by producing flyers for businesses, designing adverts, printing funeral programmes and use the printed word to create knowledge and, yes,  a new society.

These were the beginnings of the strategy Wara used to determinedly, passionately, creatively pursue his intellectual and political vision. Chip, hammer, keep on going even if you stumble ………….

This could be called slow but sure, but it was also because could Wara not help exploring everything or following every opportunity along the way – this meant his attention to time could be very flexible!

For example; If we just talk about the length and breadth of Wara’s work in the last two years, (and I will have to leave some things out):

And on top of all this, he was always available. Wara had his arms open out wide to the world.

Wara described himself on the AIP website as a random theorist and an unapologetic Ngugi’st .

As a random theorist he was a radical traditionalist – steeped deeply in African culture, he disliked its patriarchy and anything that stepped on another’s dignity and right to be.  In the same way he was a radical feminist.

Wara was a radical proponent of media transformation – the complete overturning of the present hierarchies, counteracting the socio – economic meta narrative which shapes the sector (and the country), insisting on high standards of reporting and fact checking, and

as an unapolgetic Ngugi’st – Wara was focused on overturning the use of colonial languages that dominate and distort ideas and information towards writing and celebrating African languages.

Wara was not the only Ngugi’st in the community press sector. 87 newspapers out of approximately 200 are printed/online in indigenous languages – Tshivenda, SeSotho, isiZulu, Xitsonga, Sepedi, isiXhosa and others. In 2016 these community newspapers were producing 7 million copies per month and reaching approximately 27 million readers.

Given the economic downturn and the advent of Covid, Wara and the AIP had set themselves the task of researching the community press sector to find out the present state of play. A very necessary and urgent task that needs to continue.

So many words have poured forth in sorrow, pain and love. The deepest pain is that of his family, but we all feel the loss of Wara and we are all in need of condolences and consolation.

I too loved Wara.

Wara and I have known and worked with each other for over 10 years and, since moving to Gqebera two years ago, we really become partners in crime.  Wara and I, excitedly and sometimes with much hand waving, talked about everything and anything. We investigated places and ideas – I usually drove while he commented on everything along the road. We swopped books, developed and criticised strategies, wrote proposals, laughed, got angry and used each other as sounding boards.

There is much that Wara wanted and needed to do. As he said, ” It’s too early, isn’t it?”

Like many of you, I am not sure how it is going to be to go forward without him.

Together, we need to continue working towards achieving Wara’s powerful vision

and hold our minds and arms open wide to the world.